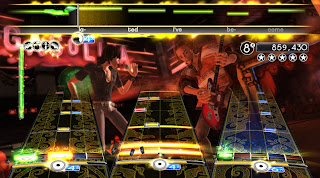 I have been seeing and reading this week about features that are coming with Rock Band 2! Since Rock Band 1 only came out a few weeks ago I was quite suprised to hear that the details for the 2nd game would have come out so soon.

Perhaps that is me being quite naive as it was obviously going to be a huge success following the success of the epic that is the Guitar Hero series! As the makers of Guitar Hero intend on releasing a full band version of their game in the near future it is probably wise for the Rock Band team to very quickly establish their own series as the better (and more established) product.

I have heard from friends that own the game that the instruments themselves were not as high quality as the Guitar from the Hero series. Drum petals snapped, strum bars stopped working and microphones ceased to work. Now it is likely that these friends perhaps used the product in a more vigorous manner than intended (in a true rock band style!) but forums on the subject seem to put them in a majority rather than a small minority.

This appears to have been noticed by the manufacturers of the game and they have taken the necessary steps to rectify the issues.

The most noticeable of these changes is with the drums.

The new kit will have a significantly stronger pedal (metal reinforced) as well as a more sophisticated pad system. Velocity-sensitive pads will more correctly reflect the sound heard in the game to the force with which the pads are struck. This is certainly an interesting feature that will at least give some truer feel to the game. 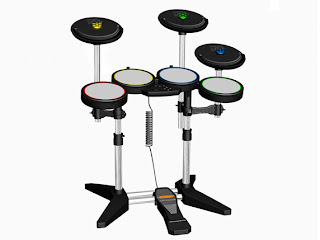 They have also added the ability to plug in a separate set of smaller pads that will make up cymbols. These will be coloured to match those of the main drum pads, so hitting either the drum or the cymbol would have the same effect on the score/note, but the sound heard would reflect whichever pad was hit.

I'm starting to think why bother with the guitar and microphone! The drum kit itself would be worth the gameplay on it's own! Depending on price this could well be a must-buy for my apartment. 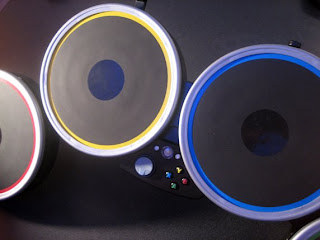 The best thing I have heard so far about this game is simply down to the compatibilty. They have said, of course, that the new instruments will be fully compatible with all future versions of Rock Band (This is no suprise). However, the new Rock band game will have the feature to import the songs from the original Rock Band. This is a brilliant feature that was certainly missing off the Guitar Hero games (so far), and elimainates the need to consistantly change disks because your friends "favourite" is on a different disk to the one that's in the console and running at that moment in time.

So I look forward to hitting the drums to the Red Hot Chili Peppers "Give It Away" very soon!
Posted by Ryan Fitzgibbon at Wednesday, August 06, 2008