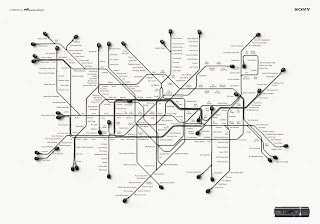 I came across a nice little ad campaign this weekend from Sony Walkman that has used their headphones to recreate the layout of the London Underground (including the overground network!). They have then used the names of bands and artists to replace the names of the stations.

The end result is quite cool in my opinion and I am surprised that nobody has done this before (that is assuming it hasn't!). At first glance it seemed to me that all the artists they have used are British, before then spotting U2 and Johnny Cash (among others)! It would have been quite nice for them to have stuck to using only British bands but to be fair there are a hell of a lot of stations in London!

I find it quite funny to find on the map that I live somewhere between Placebo and Pink Floyd and work just outside of UB40 and Tony McPhee.

Sony have also recreated the same thing for the Underground network in both New York and Sydney with equal effect. I never knew what the NY or Sydney Metros layout even looked like!

This leads me onto one interesting debate...why do Sony still use their "walkman" brand for their latest range of mp3 players?

To me the walkman was a portable cassette player in the early-to-mid 1990s before CDs became common-place. This was followed up by the "CD Walkman" before disappearing from the radar some time ago.

I can understand that the term walkman has a strong brand history as a player of music, but I feel that it relates to a completely different product/time. That would be the same to me as if they called the new Blu-ray range as BetaMax.

Maybe it just makes marketing easier if you already have a famous and successful name to promote rather than trying to push forward a new name for the product, but if I were offered an equally good walkman and ipod, i would simply assume the ipod was the newer product and go for that.

Bring on the Sony iWalk!
Posted by Ryan Fitzgibbon at Monday, August 11, 2008