Earlier this month the first mainstream TV commercial for Christianity was shown on Channel 4 to advertise The Alpha Course. The Alpha Course is an organisation that is operating in over 7,000 UK Churches with the aim of introducing Christianity to a non-church going public.

These adverts have been followed up with a series of billboards that can be found around the capital, including this one at the busy Hammersmith Broadway junction (outside the Apollo Theatre):

The Alpha Course Billboard at Hammersmith

Although this sort of organisation is of no interest to me (I find my scientific nature doesn't leave too much room for devout religious views about creation!), I can certainly see the benefits it can have on many people. After all, they are only going to help push the idea that people should be good to each, which is nice.

It is a little unfortunate, however, that somebody has gone to this billboard in Hammersmith and sprayed graffiti on it. I am not a fan of graffiti in the usual "Tags/Swear Words" approach, but can appreciate the more intelligent comments that people can make.

Although I do not currently have a picture of the mentioned alterations, I have attempted to recreate it with the power of the spray can option on Paint! 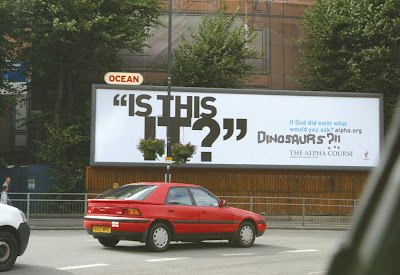 The graffiti on the Hammersmith Alpha Course Billboard - Click to make bigger
"If God did exist, what would you ask?"
"Dinosaurs?!!"

I must admit that this did make me laugh. It reminds me slightly of the graffiti that can be found in certain areas of Oxford. In Oxford it is incredibly rare to find the tag type graffiti, but rather statements like:

There is also a far amount written in French and Latin that I can never remember.
Posted by Ryan Fitzgibbon at Monday, September 22, 2008

I did this. you can see the original on flickr. I hoped it would make a few people laugh, and maybe question!