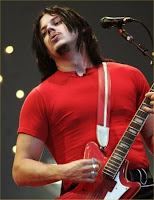 In a quick follow-up to my previous entry on the Coke Zero Zero 7 ad tie-in with Quantum of Solace, it appears as if Jack White isn't a very happy bunny(!).

It seems as if the music heard during the Coca-Cola Bond ad is in fact the instrumental section of the forthcoming Quantum of Solace theme tune "Another Way To Die" rather than a separate track made exclusively for Coca-Cola.

This statement was made by The White Stripes management team:
"Jack White was commissioned by Sony Pictures to write a theme song for the James Bond film Quantum Of Solace, not for Coca-Cola."
"Any other use of the song is based on decisions made by others, not by Jack White."

Although I do like the sound of the music in the Coke Ad, it is a shame that Sony Pictures allowed the highly anticipated theme tune to what shall be one of the biggest films of 2008 to be sampled and released before the film itself.

One of the biggest surprises in Casino Royale was the fantastic opening theme tune by Chris Cornell. Thanks to this ad it will now be virtually impossible to create the same level of surprise. I suppose the film itself will have to live up to the hype instead!
Posted by Ryan Fitzgibbon at Tuesday, September 16, 2008