Many of you out there will have heard of "The Pirate Bay", a website (owned by some Swedish people) that hosts torrent files and torrent tracking that enables free peer-2-peer downloading of music, movies, tv shows and computer applications. The Pirate Bay became the centre of attention during the recent battles between peer-2-peer networks and the movie industry.

It has long been rumoured that The Pirate Bay was looking into producing a streaming video website that would allow people to view the content that they can normally download through peer-2-peer systems directly through their internet browser. This would produce something dubbed by the media as the "YouTube of Illegal Content".

Last month, a site entitled "The Pirate City" launched a Beta testing phase (which has already come to an end!!) and is already hosting hundreds of movies to watch online for free. The quality of the videos available ranges depending on the source of the video and is deliberately lower quality to reduce the size of the file that needs to be streamed, but in general it is better than expected and certainly watchable.

The real surprise has been the revelation that the site appears to have nothing to do with the owners of The Pirate Bay website, despite the use of their name and logo. It seems that The Pirate Bay has been the victim of some ... (irony alert) ... piracy! However, the interface they use is very clear and in no way looks cheap or put together by an amateur.

The Pirate City's rise up the Alexa ranking was inevitable (as shown below) and it will interesting to see what Hollywood will think about it: 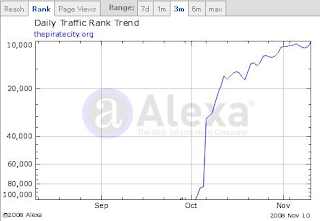 I love this site, the movie quality is never beatable. All the videos constantly works but it seems as though they are actually still in beta phase because I know they are still having issues handling the load. But I just watch quantum of solace for free, and it was insane.

I also use this great site
www.nosubscriptionrequired.net/
for free movies