Uncharted: Drake's Fortune was undoubtedly one of the greatest games I have ever had the pleasure of playing and owning. It took all of the adventure and excitement of the best Tomb Raider games but added in a very gripping plot and several believable characters. So much so, that as soon as I completed the game on "Normal" difficulty, I played through it on "Hard" and then again on "Crushing". That is the first time I have done that with a game.

That is just one of the reasons that I was excited by the information that was released by Naughty Dog Inc (the guys that created the Crash Bandicoot games) about the upcoming sequel - Uncharted 2: Among Thieves. 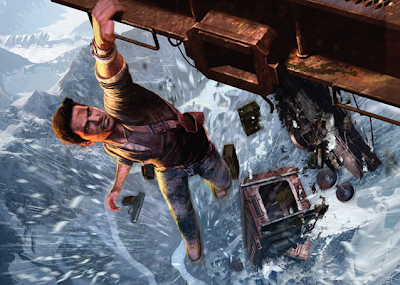 The new game will feature the first game's protagonist, Nathan Drake, as he embarks on a journey following the travels of the legendary Marco Polo. In addition to the usual improvement in graphics, there will also be the inclusion of a new free-climbing mechanic and stealth gameplay, which will only add to the enjoyment.

To coincide with these announcements, the following trailer has also been released. It has been said that this trailer was created using the real-time imagery of the in-game character models rather than some separate CGI work. This should mean that the graphics of the game itself will look somewhat similar to what we can see here!

I, for one, cannot wait for this game to be released. I will have to make sure I can book a week or so off work to give me the chance to make some headway with it.
Posted by Ryan Fitzgibbon at Wednesday, December 03, 2008