Like any good superhero**, Google has many tools at it's disposal. In certain ways, these gadgets (if used correctly by the right people) could potentially be used in order to fight crime and save lives.

In fact, this premise partially became a reality yesterday, as BBC News reported.

This wonderful story is one of a kidnapped nine year-old girl in Athol, Massachusetts named Natalie Maltais. It was suspected that she had been taken by her own grandmother, so a fire-fighter and police officer teamed up. Since 2005, US law has stated that all cellphone providers must be able to locate 67% of callers within 100 metres and 95% of callers within 300 meters. That in itself is a quite interesting fact!

By using this fact, the two man team were able to obtain the rough location of the child's phone through the provider AT&T. Rather than immediately sending police to that location (giving the grandmother a chance of escape whilst the area is being searched), the fire-fighter had the great idea of using Google Street View in order to see what was in the vicinity of that area. The photo below shows the result that they got. With the image of a hotel being visible, they were able to use Google Search to get the contact details of the hotel and then sent police to the location, where the girl was indeed rescued! 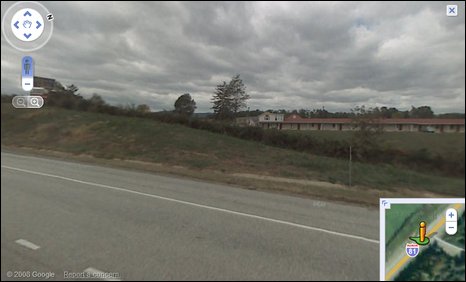 This is a really great story of teamwork, and the use of great technology in the hands of intelligent and creative thinking people.


**This statement could be debated in some length and for quite some time! As I tend to prefer keeping my blog entries short and (preferably) sweet, I will simply state that when making the claim of a "good superhero" I had Batman in mind. Although I can accept that there are other equally good superheroes that do not take advantage of tools and gadgets, there are normally good reasons for this. For example, Superman does not often make use of anything other than his own superpowers. However, the fact that he is not human and has such a vast array of powers due to the Earth's yellow sun, it is hardly far to compare him to the likes of Batman. Batman is simply a rich human that had an emotional problem and too much time on his hands. That is all something we can aspire to. Although this may now seem like rambling, there is also the question to be raised as to whether other fictional creations could be considered as superheroes. James Bond would be one such example. He repeatedly saves the world (with the use of gadgets/tools I may add!), just like comic superheroes, but does so through (as far as I can tell) luck, charm and determination. There does not seem too much skill involved, with the poker scene in Casino Royale an exception. I somehow feel like I have now gone off the point a little! Where was I?...Erm...I suppose that depends on whether you read this as an afterthought or whether you saw the asterisk and decided to follow that argument! So please either stop reading, or return to the top of the post. Thanks.
Posted by Ryan Fitzgibbon at Saturday, January 10, 2009