Following on from my last post regarding the Google Server Error Message, it appears as if it is not just me having the problem!

The internet is alive of people experiencing the same server issues, and then talking about it on twitter and searching about it on (ironically) Google.

Dubbed "Gfail" the volume of searches around "Gmail Down" and other related terms is huge. Out of the Top 10 hottest searches on Google so far today, 7 of them are Gmail related (at the time of post): 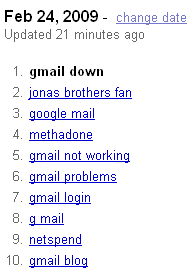 Twitscoop is also highlighting how much buzz there is around the gmail problem with a strong presence of the term "Gmail" and even "Gfail" on Twitter: 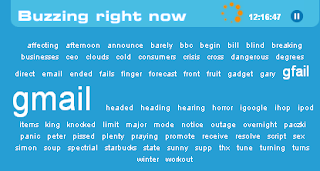 Google have posted the following comment on their gmail support site (as reported by Pocket-Lint):

"We're aware of a problem with Gmail affecting a number of users. This problem occurred at approximately 1.30AM Pacific Time. We're working hard to resolve this problem and will post updates as we have them. We apologize for any inconvenience that this has caused".

The service has been coming and going over the last hour or so, but I expect Google should have things sorted pretty quickly.
Posted by Ryan Fitzgibbon at Tuesday, February 24, 2009