There has been a lot of news over the last couple of months surrounding a particular piece of advertising that has been placed on the side of buses across London and the rest of the UK.

The "controversial" UK bus slogan
The advertising campaign is backed by the British Humanist Association and prominent atheist Professor Richard Dawkins and simply states "There's Probably No God. Now Stop Worrying and Enjoy Your Life". For obvious reasons, this has caused quite a bit of debate in religious circles. On the one hand, some religious folk have show dismay at the existence of these ads and called for them to be removed. One Christian bus driver in Southampton, Hampshire also refused to drive his usual bus because of the slogan on the side. However, some religious leaders have welcomed the posters as they are glad that it will draw people in the simulating world of religious debate.

I remain impartial to the ads myself, but do approve with the inclusion of the word "Probably", as some atheists have complained should be replaced with "Definitely". As a man of science, I am only willing to except as fact anything that can be proved or disproved by scientific method. As religion is based upon a foundation of faith (i.e. God does not allow himself to be proven to exist), it makes it impossible to scientifically prove or disprove the existence of God. To this end, I would not be happy to claim that there either is a God, or that there isn't a God! Therefore, I feel is it much better to say "Probably", as the slogan does.

However, if you were wishing that these bus advert slogans said something else, then I highly recommend visiting RuleTheWeb.co.uk where they have created a lovely "Bus Slogan Generator". Using the picture of a UK bus with a blank advertising strip along the side, you can create wonderful slogans of your own using the same font styles that are used in the original advertising campaign. 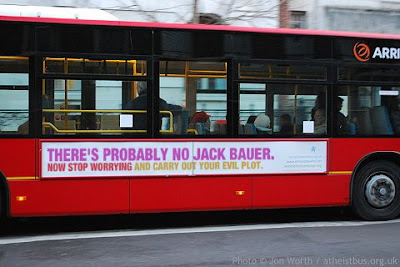 That's exactly what he wants you to think! 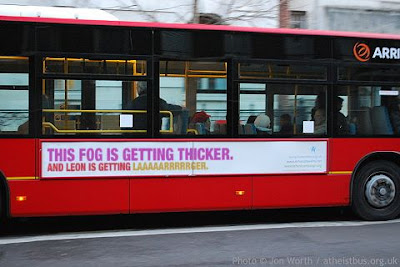 Classic Quote!
I am sure I will keep coming up with better ideas, and maybe create a little collage from them!
Posted by Ryan Fitzgibbon at Sunday, February 01, 2009