MSI (the computer motherboard manufacturer) have released a great new viral to correspond with the launch of their new X-Slim Series of laptops.

The viral features a guy (wearing a lovely lycra outfit!) catching laptops between his butt-cheeks that are thrown at him from a series of distances and heights. With over 1.2 million views in just under 6 days, it is proving to be quite the hit on YouTube. However, the number of comments by people that feel that they need to point out that the video is a fake always amazes me. The whole point of virals is to create talking points and entertain, not provide real, true-life stories.

The viral makes it clear that it is a tribute to the original Ray-Ban viral that I featured in the very 1st post of this blog!

In the Ray-Ban viral, the trick was that sunglasses were thrown by one guy to another and he would catch them on his face. This just takes the concept to the next level.

In the Ray-Ban Ad, the trick was accomplished by having the sunglasses pulled off the face using a piece of string. The video was then played backwards to achieve the desired effect. I would doubt that this method was used for the MSI viral as a laptop would be much too heavy to pull using string. The alternative would be a case of some very clever video editing to splice the footage of the laptop being thrown with the footage of a laptop that is stuck between the butt cheeks! Well done.
Posted by Ryan Fitzgibbon at Sunday, August 16, 2009 1 comment:

There has been conflicting reports over the last few days regarding the market share that Microsoft's new Bing Search Engine has been gaining following it's launch at the end of May 2009.

The situation in the US is being watched very closely as this is where Bing is initially concentrating it's efforts, both in terms of the engine development and testing, and in terms of advertising.

The below graph (courtesy of Statcounter) shows how that over the past 2 and a half months, Bing has been gradually building market share from 6% to 12% in the US. During the same period, Yahoo has remained considerably stable, dropping from around 12% to 11%, and Google has dropped the other 5%. Google is still clearly the dominant force, with around 77% share: 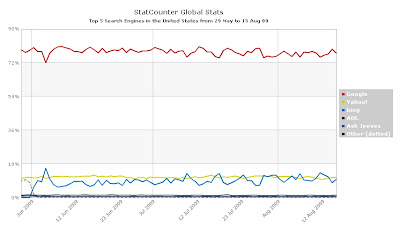 This is clearly great news for Bing. The initial objective was to be the 2nd biggest player in the market. With the gains they have made in the last few months, plus with Yahoo giving up in the search engine battle and handing their share over to Bing, it looks like the first battle has gone in favour of Microsoft.

However, Mashable have reported that statistics released from Nielsen tell a different story.

Whilst the lose in share for Google from June to July is still recorded, the Nielsen figures suggest that it was in fact Yahoo that gained the market share and not Bing.

These results are quite intriguing and unexpected. All 3 major engines gained volumes of search queries month-on-month with the industry as a whole recording a rise of queries by 5%. However, Yahoo's volume of searches rose 11% (compared to Google's 3%), which took it's market share to 17.1%.

It is thought that the increase could be explained due to the huge amount of media interest surrounding the Yahoo/Microsoft deal and the launch of the new Yahoo homepage. It will be interesting to see what figures Nielsen release for August and whether this trend continues.

Either way, it is good news for Bing, as any market share loss for Google is a step in the right direction for them. However, with Google creating their own media interest around the new caffeine platform, it is quite probable to see things swing back in their favour.
Posted by Ryan Fitzgibbon at Sunday, August 16, 2009 No comments: