On 15th September 2009, Audi shall be making an announcement at the Frankfurt Motor Show that will be based upon some new "electricity" based vehicle.

To correspond with this announcement, Audi have created a series of viral ads that direct viewers to their "Electricity Untamed" website. 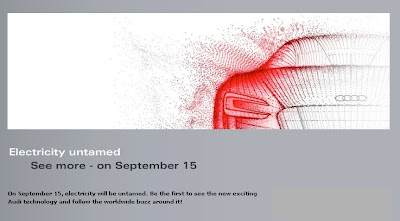 At present the website does not give too much detail away, but emphasizes that "electricity has been dumbed down" and that this new technology will "unleash the untamed power of electricity".

The rumours are that the car to be announced will be a performance version of the R8, or a completely new vehicle, dubbed the 'e-tron'.

However, I am a little disappointed that a website that is trying to emphasize the sheer scale of the engineering feat achieved features some very Physics-poor statements:

"A single bolt of lightning contains 1 billion Volts of power" - I am sorry, but Volts is not a unit of power! Apologies, but that is the purist in me coming out.

However, the virals released are indeed a bit of fun, and do get the point across: